Remakes and remasters aren’t just about nostalgia. Classic games are for new players, too.

For those who were there, battling against the Prime Evils of Hell in 2000’s Diablo II, the memories are priceless, and likely unforgettable.

When the developers at Blizzard Entertainment took on the challenge of resurrecting this classic game in 2021 in the form of a faithful remaster with modernized visuals, they sought to bring back that initial sense of exhilaration that players had felt, while also giving new players a chance at experiencing that game’s timeless appeal.

We spoke to Blizzard Entertainment’s Executive Producer of the Diablo franchise, Rod Fergusson about decisions the Diablo II: Resurrected team made to help ensure that the game continues to resonate with those who played the original, while also having crossover appeal for new audiences.

If you were a PC gamer at the turn of the millennium, you know all about Diablo II. Hailed as one of the greatest games of all time, Blizzard Entertainment’s iconic action-RPG has acquired a mythic status. But to many modern players, the game has felt somewhat daunting to try to get into—in no small part because it hasn’t been particularly welcoming to play on modern machines.

For the team charged with bringing the classic back to life in the form of Diablo II: Resurrected, this provided multiple opportunities to not just modernize the game with new graphics, remastered sound, and remade cinematics, but also open the gates of the Burning Hells to even more players around the world. 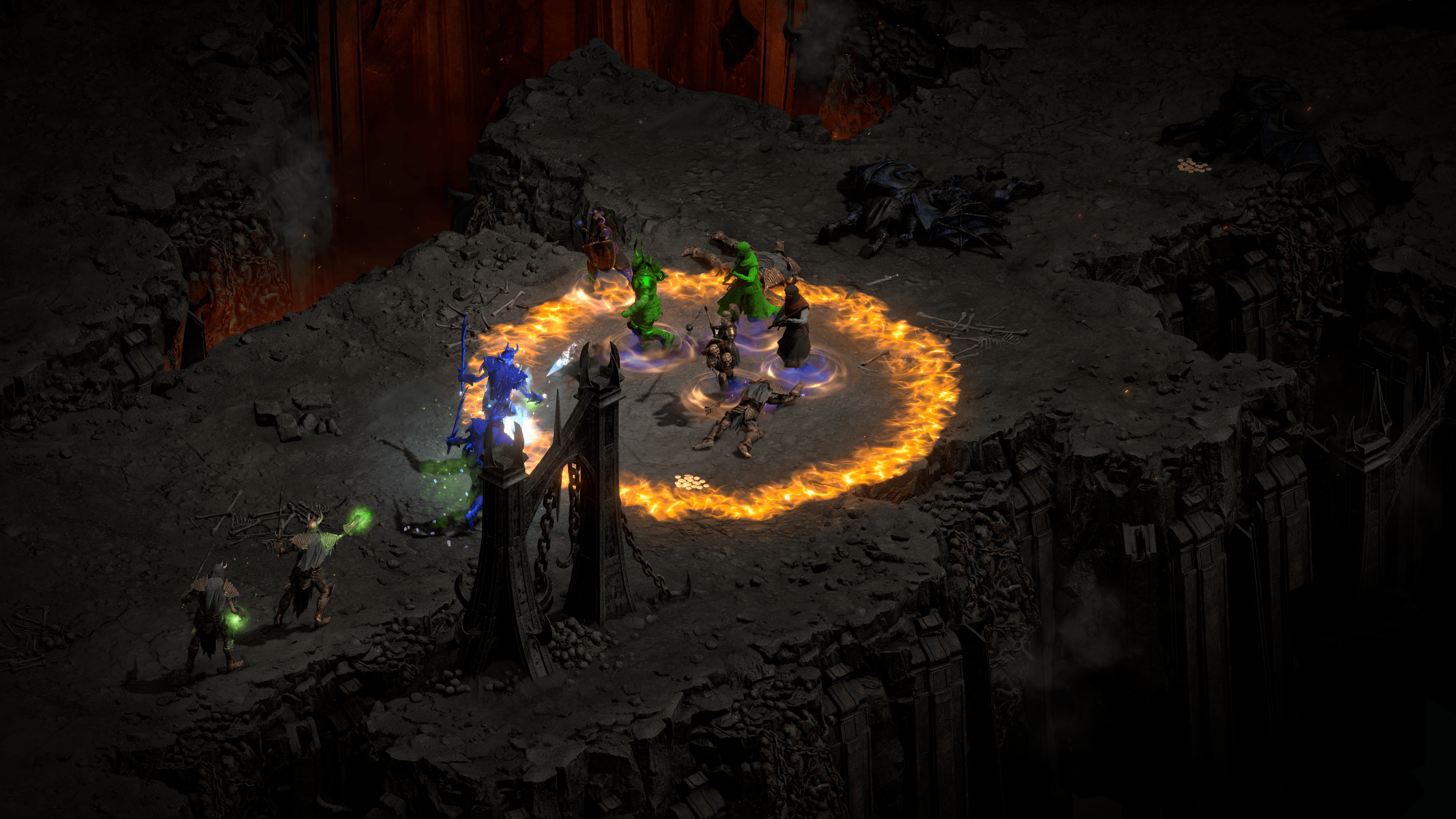 When Diablo II: Resurrected launches on September 23, players around the world who never had the chance to experience the original will be able to play with new graphics, remastered sound, enhancements for playing on controllers, and more.

One such opportunity: bring it to consoles. Originally developed purely for mouse and keyboard, the original game’s point-and-click interface is considered by some to be an essential part of the Diablo II experience, and something potentially blasphemous to toy with. And so, the team set out on a quest to determine how to bring the game to controllers while keeping that essential Diablo II spirit intact.

“One of the challenges the team identified early on was ensuring that collecting and managing loot felt right on controllers,” says Fergusson. “Finding gear and making difficult choices about what to keep and what you need to leave on the dungeon floor is a core part of Diablo II, so we spent a lot of time experimenting to ensure we got it right.” 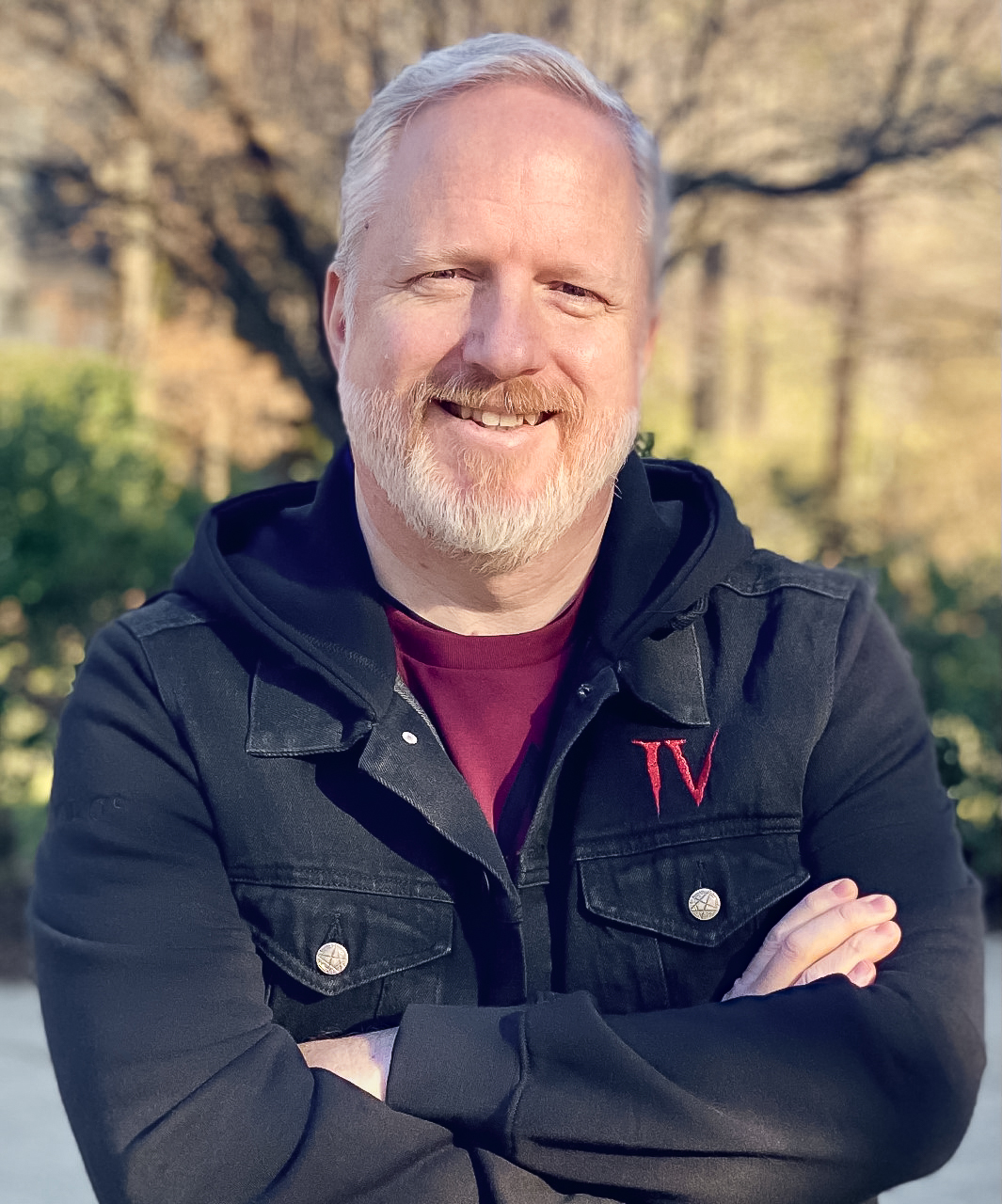 This led to changes such as the option for players to automatically pick up gold rather than having to click each individual pile, and adding shortcuts to make it easier to compare, equip, and sell different pieces of gear. Other enhancements to the game such as an expanded and shared “stash” that makes it easier to share gear between characters proved to reduce the pressure players felt to hang on to (and potentially find a place for) every piece of gear they come by.

The controller also made for a whole new way for players to command their characters. “With a mouse, you’re essentially telling the character what to do—you click somewhere, and they walk there by themselves,” says Fergusson. “But with the controller, you are the character, and have direct control—a fundamentally different way to play from the original, but one console players are a lot more used to.”

Similarly, console players have come to expect to use one button to both attack and interact with the world based on context—an expectation so ingrained in today’s console action-RPGs that the team felt it was critical to follow suit.

During the game’s public tests, the team found that even longtime Diablo II PC players enjoyed (and in many cases, preferred) this new way to play—evidence that the Diablo II spirit was still alive and well.

Then there were the aspects of the game that didn’t feel right to mess with, such as Diablo II’s iconic inventory ‘Tetris’, which finds players fitting differently sized armor and weapons into their inventory grid like puzzle pieces to maximize space. While the team considered taking a note from the 2013 console version of Diablo III, which uses straightforward lists to manage loot, they quickly realized that the original version was too essential to change. 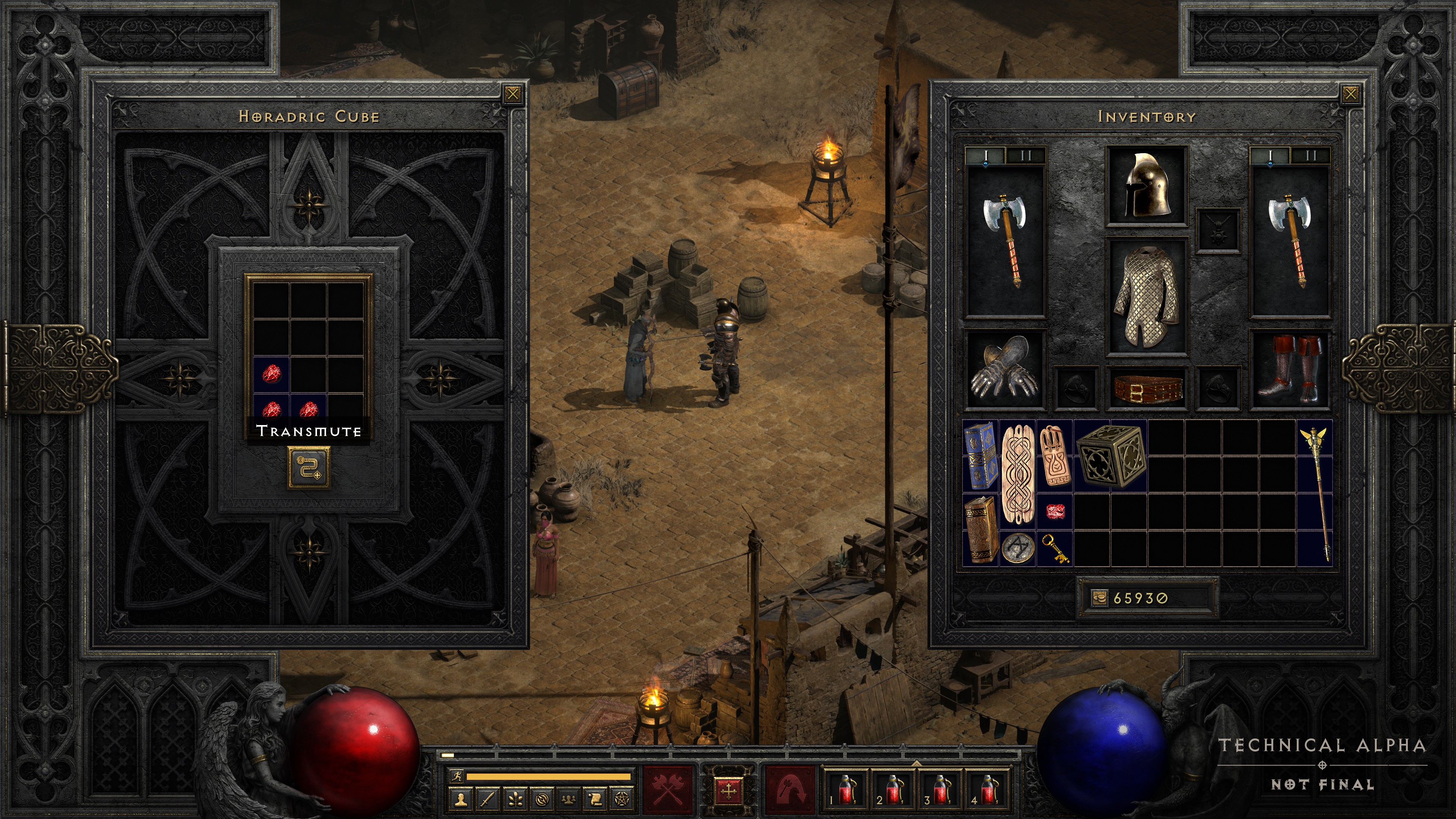 Diablo II’s iconic inventory ‘Tetris’ is an essential part of the game experience.

Instead, the team implemented a free cursor using the controller’s thumb-stick—a direction that they felt best matched the spirit of the original game. For this and other key Diablo II quirks (such as equipping arrows to use a bow, or the game’s “belt” interface where players access potions and scrolls), the team spent extra effort ensuring it was clear to console players how the classic gameplay of Diablo II differed from what they might be used to in modern games.

“It’s a balancing act,” says Fergusson. “But we’re committed to ensuring console players can enjoy everything that makes Diablo II what it is without compromising the original PC experience.”

Another opportunity to reach new players came in the form of developing new accessibility options that were never part of the initial design.

“At first we weren’t sure how much we’d be able to do with a game that’s over two decades old,” says Fergusson, “but we felt really strongly that we could make the game more accessible while keeping its soul intact, and we started exploring all of the avenues we could to see what would be possible.”

As part of the process, the team drew on several resources, including AbleGamers’ Accessible Player Experiences program, a training tool designed for developers who are seeking to make their games more accessible. The Resurrected team also reached out to players with disabilities through focus groups to get input on the in-development accessibility features. 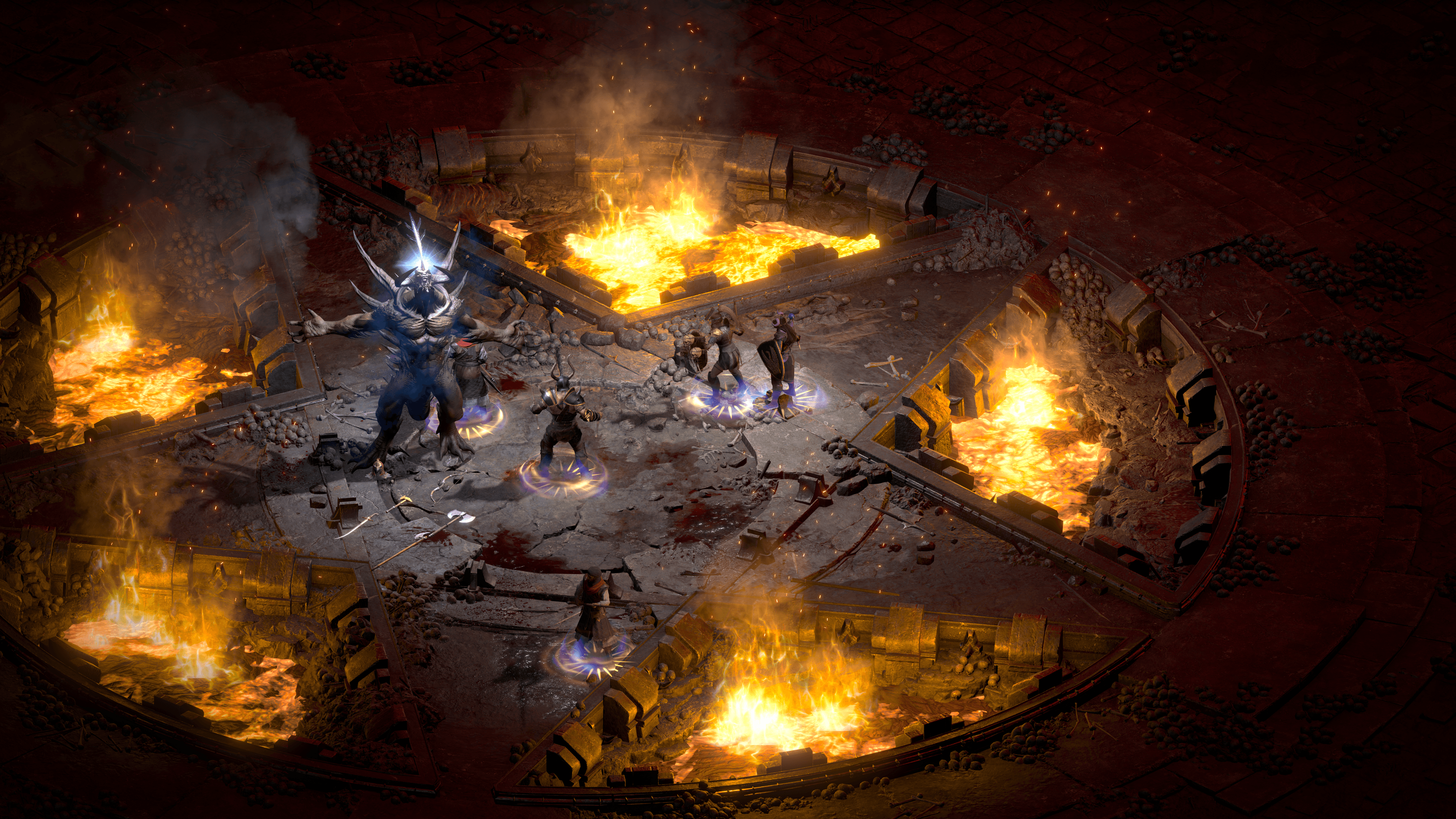 Using a controller rather than a keyboard and mouse makes for a whole new way for players to command their characters.

The final suite of accessibility options includes modes for players with different forms of color blindness; the ability to increase the size of the game’s interface; and options to enhance the readability of text. The team also added controller support to the PC version for players who prefer the option; the ability to adjust cursor sensitivity on consoles; the ability to assign commands to a variety of different keys or buttons as they desire. On the audio front, players can adjust individual sound channels to play only certain sounds. 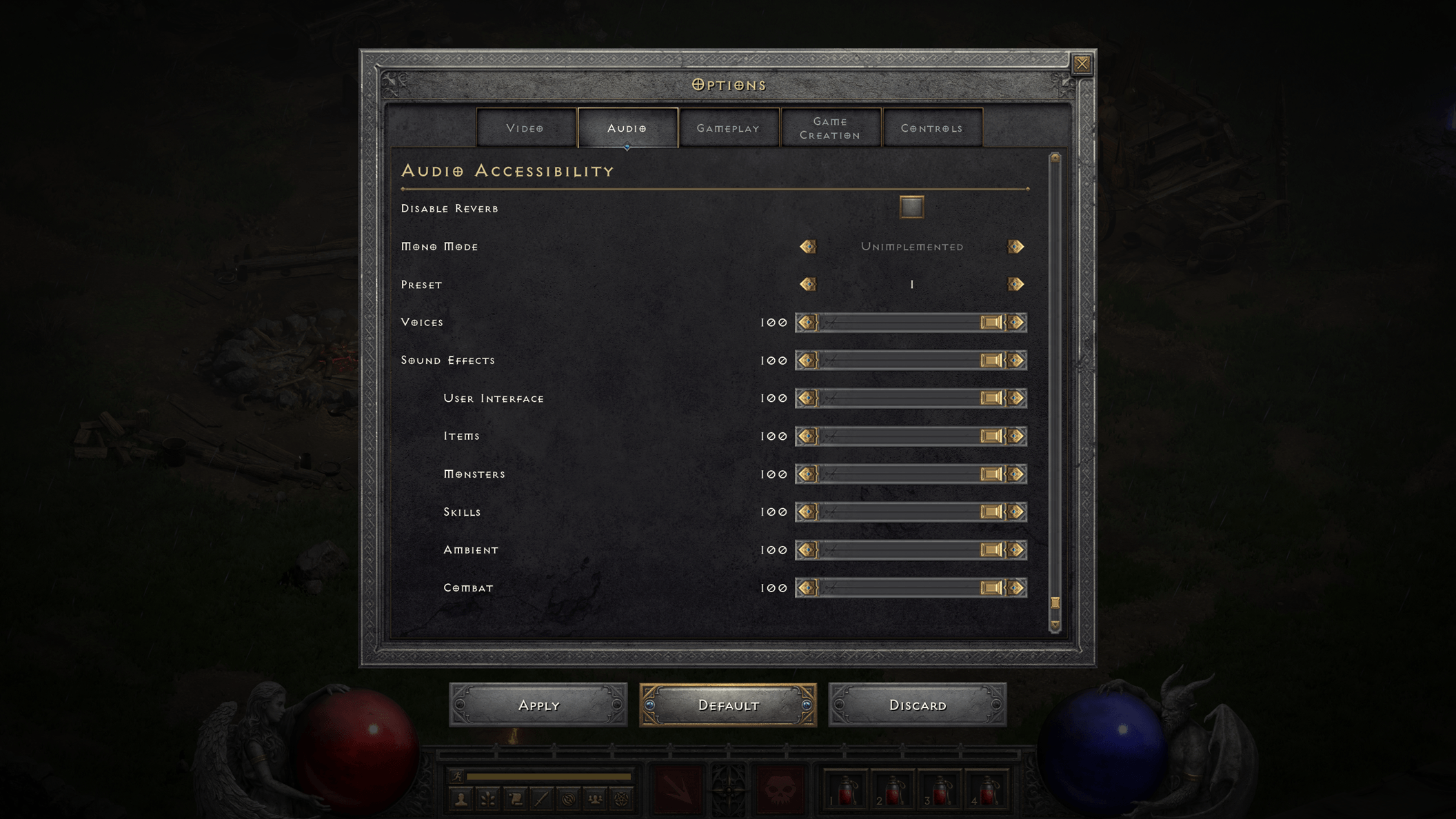 Diablo II: Resurrected adds a suite of accessibility options that weren’t in the original, including the ability to manually augment sound effects, culling what players don't think is essential and enhancing what they prefer.

“We got so much valuable feedback that helped us really hone the features and achieve our vision,” says Fergusson. “It’s exciting to think about all of the new people who’ll be able to enjoy the timeless demon-slaying fun of Diablo II for the first time.”